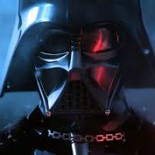 About a year ago I entered the world of miniatures gaming by way of Star Wars: X-Wing.  I have always really loved board games though miniatures games seemed a bit much for me.  However when I would walk in to the game store in my area and see that Falcon sitting there it was only a matter of time before I gave in and bought X-Wing.  From my very first game I absolutely loved it.  So when I heard there was going to be another Star Wars miniature game focused on ground tactical battles I was immediately interested.  Though I was mildly turned off by the idea of having to paint the figures the more I learned about the game.

Overview
Publisher:  Fantasy Flight Games
Players: 2-5
Time:  90 minutes
Style:  Scenario-driven one vs many
MSRP: $99.99
There are really two games included in one box with Imperial Assault, the first being the campaign.  For this review I will just be taking a look at the campaign part of the game, and I will write a separate review for skirmish.

In the Campaign one player will take on the role of the Imperial Player, while one to four others will play as the Rebel Alliance.  In the full five player game each Rebel takes on the role of individual original Rebel heroes.  These heroes include a soldier, a smuggler, a wookie, a sniper, a commander, and a jedi exile.  Each hero has a total health value, an endurance value, a speed, a defense die, some abilities, and attribute die.

Each round is measured by all figures having had their activation.  The Imperial player and the Rebel Players will alternate the activations beginning with the Rebels.  When a figure activates they are able to use two actions, actions can be spent on a variety of things including attacking, moving, special actions, resting, or interacting with anything specified by the mission.

+  Tactical Aspect
This game has a very strong tactical aspect, positioning and activation order play a huge role.  There is always a need to weigh one decision against another.  Most missions include a round limit which really pressures the Rebels to spend every action with extreme caution.  Balancing killing enemy units with completing the objective is a very difficult thing to do.  There are a lot of really powerful things the Rebel heroes can do but they are pressured to complete an objective quickly and are not often allowed to let loose.

+  The Dice
Dice are often something I don’t like about games.  There is something about rolling dice that bothers me with games that are about tactics I feel it becomes too random and more often then not hurts you.  I think an element of randomness is good for a tactical game it adds a bit of an unknown element.  Though normally I find the average dice mechanic is too random.  However the thing I love about the dice in this game is that there are no bad dice.  Red die have high damage output, yellow allow for the use of more special abilities, blue are strong for accuracy allowing you to shoot further, and green are all around average not strong or weak in any of these areas.  On the defense the black die has a greater capacity for cancelling damage, however the white die gives more surge cancels(surges are a symbol allowing the use of special abilities, found in great quantity on the yellow die) as well as the dreaded x symbol which cancels all damage in the attack altogether.  The great thing about the dice in Imperial Assault is there are no bad dice only different dice for different occasions.

+  Theme
The theme is something that I guess some people out there may not like but I have been hard pressed to find people who honestly don’t like Star Wars at all(especially among those who play lots of board games).  However if you do like Star Wars you will love this game.  It is overflowing with theme, the game feels incredibly immersive and truly feels as though you are either part of a small elite team struggling against the crushing might of the Empire, or a supreme ruler determined to overwhelm the rebel scum with crushing numbers.  When Darth Vader hits the board every Rebel player is very scared, as they should be.  I really feel this game captures the wonder and adventure of Star Wars.

+  Balance
I’m very impressed by how balanced this game is.  As an incredibly competitive person one thing that I don’t usually enjoy about RPGs is that there isn’t really a competition.  However in Imperial Assault the Imperial player is not just a glorified DM, he is a competitive player.  The Imperial player is actively trying to crush the Rebels, and it is neither too easy nor too hard.  The game is incredibly balanced even if one side wins a few in a row and gets some extra advantages it doesn’t lock the other side out from winning.  More than half of the games with my group the winner is determined by the final die roll, where it could go either way depending how much damage someone may do.  If I were to say anyone has an advantage in a specified match I would say that whoever is defending has a small advantage.  What I mean is that many mission involve one side protecting something while the other side tries to either take that over or destroy it. 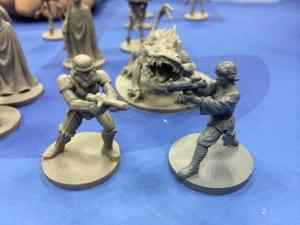 +  Lot’s of Pieces
Though the game is very expensive I don’t think anyone can tell you that you won’t get your moneys worth.  There is a ridiculous amount included in the box.  Even an AT-ST!

+  Expansions
There is going to be lot of expansions for this game both small figure expansions called Ally and Villain Packs, and there will be big box expansions giving new tiles new campaigns new missions.  They have already previewed the first wave of new figures on the fantasy flight website which include 7 new groups including iconic characters such as Han Solo, Chewbacca, and IG-88.

+  Puzzle Pieces
All the maps are built using puzzle piece tiles that form many varying maps giving great variety to each place you play.  There are many different configurations of the map tiles giving each map a new strategy for victory

–  Lots of Pieces
Though having lots of pieces is also one of my positives because it definitely makes the game worth the hundred dollars you need to spend on it, it is also a negative because it is very difficult to sift through it all.  It can easily be overwhelming to work through all the tokens and cards your given when first opening the box.  Even the tenth time you open it its hard to know exactly what to pull out and not get any more.  This is partially due to the fact that there are really two games included in the one box.  Storage is a nightmare and I still don’t know if I like my current storage solution. 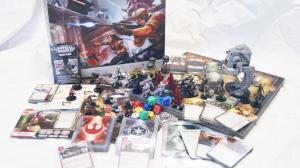 –  Set-Up
Set-Up is easily the worst part of this game.  It can easily take nearly a half hour to set up a mission especially the first few times you have to do it.  The puzzle piece map tiles make the variety amazing but it is pretty difficult to build the maps in a timely fashion.  This would be mitigated if it weren’t for the fact that the four Rebel players can’t help set-up too much without giving away parts of the mission or Imperial spawn points, what is supposed to be secret information only known by the Imperial player.  However one person setting everything up is a pretty big job, and leaves decent down time for the others. This can be worse if doing two story missions in a row because you have to break down the last mission before setting up the next.

–  Time
The game isn’t really supposed to be very long however like many co-op games it can easily stretch to an extreme time frame based on the amount of discussion taking place.  After a game session that last over three hours not including set-up or break down, just because the Rebel players argued over every move, we enforced house rules that on how to keep each Rebel players turn taken in a timely fashion. 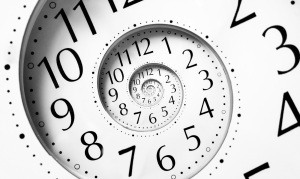 Overall the negatives are so minor compared to the positives.  Everything about this game is a blast, it is incredibly immersive, pleasantly competitive, and incredibly tactical.  There is an insane amount of replay-ability and promises plenty of expansions to keep everyone interested.  It is a definite time commitment and set-up is something you have to struggle through a few times before it becomes pretty easy.  I would recommend everyone buy this game or at least one person in a gaming group should own it.  If your a tactical game fan buy this game.  If you are a Star Wars fan this is the game for you.  In the next part I will discuss the Skirmish game however for the Campaign I give this game a 10/10.

This entry was posted on February 5, 2015 by emeralddays in Uncategorized.